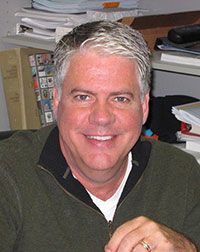 Jeff graduated from Heelan High School in May 1978 and attended Briar Cliff University where he obtained his Bachelor of Arts Degrees in business and psychology in 1983. While in college, Jeff first started working in the printing business as a salesman for M&M Copy Quick which, coincidentally, is now one of his competitors. After graduating from Briar Cliff, Jeff worked for Heartland Paper Company from 1983-1986 as a salesman. He sold industrial and fine paper products to local printing companies. He then went to work for Moore Business Forms from 1986-1987 which, at that time, was the largest printing company in the world. His experience as a salesman for these reputable companies gave him the opportunity to master product knowledge and the importance of customer service. These beginning years gave Jeff invaluable insight into the world of printing that would later serve as the motivation to own and run his own printing business.

In 1987, Jeff took advantage of the opportunity to purchase “The Copy Center” which was a printing business located in downtown Sioux City. At the time of the purchase, The Copy Center was barely breaking even by generating a mere $80,000.00 per year in gross sales. Jeff viewed this as a perfect opportunity because he knew that the business model could be run in a more cost-effective and profitable manner. He started with advertising the business both by making personal contacts (hitting the pavement so to speak), as well as a direct mail campaign and radio/television spots. Through these efforts, his business began to grow by leaps and bounds. Jeff’s day to day business responsibilities included marketing, sales, project management, consumer relations, business administration, staff management, accounting, etc... In less than seven years, the business grew under his leadership to gross over half a million dollars. Jeff employed and managed a full-time staff of eight people while he continued to sell and market his business.

During this timeframe, the printing business was facing dramatic changes in its equipment and capabilities as the high-tech age of computers, software, high-speed copiers, color copiers, etc… impacted the industry. Jeff researched the new technology and stayed ahead of the curve by implementing this new equipment into his business. Jeff says, “It’s hard to believe that no one had a personal computer when I first started in this business, but I can’t imagine running a successful business today without staying ahead of the ever-changing technology.”

In 1993, Jeff purchased a second company called “Sioux City Blueprint” which sold blueprint supplies to architects, engineers and landscape companies. After operating this business for a little over two years, he was able to sell it for a handsome profit.

In 1994, Jeff formed a partnership with Gene Johnson when they merged their two related businesses into what exists today as “Record Printing.” The main reason behind forming this partnership was that Jeff’s own business had grown to such an extent that his equipment could not meet the demands of the orders that were being placed. This partnership enabled both Gene and Jeff to further expand their customer base by better serving the needs of their clients.

Jeff has been around the printing business for over thirty years now. He has learned a great deal during his years at Record Printing. He has demonstrated his management skills by running a million dollar company over the past fifteen years, as evidenced by his financial records. Even in these challenging times, Record Printing continues to be a sound and profitable business with a highly qualified staff that are all committed to perpetuating its reputation as a leader in the printing business.